The second gaming session Age of Sigmar's Soulbound RPG has been concluded. I know its not a really popular part of my blog, but hell it is MY blog so here goes ;). This happened after the group beat a warband of Khorne in the forest near Hollowreef.

The group started out taking a rest to give the wounded members time to heal. Using the system for time in between adventures (similar to Warhammer Fantasy Roleplay 4th) all non-wounded members got to pursue their own goals (for instance: the Kharadron upgraded his armor). A week later the group reformed at the keep. Stormcast Vandinos told them that the map they found in the previous encounter had been studied by the librarians.

It showed Hollowreef as a city with five distinct districts, each separated by large airlock-like gates. The bottom district appeared to be a warren of small rooms and hallways. The center district was an industrial area. Huge gated tunnels seemingly run from the sea into this district. On the topside of Hollowreef is a third district that appears to be the trading hub. The two Kharadron airdocks spiking from Hollowreef lead towards this district. Most of the rest of the top of the reef is what used to be a luxurious enclave for the richest inhabitants.

The fifth district on the opposite side of the trading district is a zoo. This is the only known area as the Singing Mages act as groundskeepers here. They also confirmed that huge stone gates - once used as flood protection - now close of the districts from each other and the outside world.

General Askuri informed the group that local fishermen reported small doors on the bottom of Hollowreef. She had already assembled a group of scouts to explore and asked the group if they'd be willing to come along and aid these soldiers. The group accepted the request and met a team of ten Freeguild troopers consisting of a commander, seven soldiers, a battlemage and his apprentice. All members of the detail wore red uniform coats beneath their armor.

The group embarked on a barge and sailed off towards the nearest open door. They entered through a small stone door that opened flush with the outside of the cliff. As the commander of the scouting party was just about the most uncaring and rude person on the planet, the group quickly lost interest in protecting his unit. They 'bravely' told the scouts to do their thing and sent them first into the damp hallways encrusted with red, white and black mold.

The group followed the scouts into the damp complex, the mold grew thicker on the walls, floors and ceiling. Suddenly the gas alert in the Kharadron's helmet started beeping. The academics in the party studied the mold closer and realized that the red mold was expelling hallucinogenic spores. The group masked up and warned the Freeguild scouts to do the same.

As they moved deeper through mold encrusted hallways, flanked on either side by ransacked small apartments, the group took some time to study the carved shafts bringing daylight into the hallways, marveling at the engineering required. After a while they came upon a larger room, by the looks of it an underground market square. A rail thin man with a bloated hunger belly was shoveling in his black mold garden while whistling a merry tune.

After a cautious approach the group said hello and were introduced to Old Jos. He had three moldy teeth (one of them moved mysteriously in his gums) and a body covered in sores. Horrid looks aside, the man was very friendly. He offered the group a swig of mold-wine from his flask (all refused) and told them enthusiastically about his garden. All the red mold had to go. He invited the group to move deeper into the district and meet his fellow gardeners. He also recommended visiting the Deathodendron, it was that way.

The group moved on through broader corridors that contained thick mold and small trees that looked like weeping willows with leaves made from slimy algae. One of the Freeguilders tried to grasp something shiny from a hollow in one of the trees and started screaming as her arm was sucked into the hole. The Witch Aelf helpfully tried to cut the trapped arm off, but was too horrified to strike as blood sprayed over the moss and trees, bringing the vegetation to life. Moss and tree limbs moved excitedly as the garden fed on spilled blood. The corpse of the Freeguilder was overgrown in minutes. The group decided to stay away from the trees from that point and moved on.

They hit on a large underground market square with a whole bunch of people looking like Old Jos. All working with shovels and digging at mold. A bigger, fatter man holding a large shovel introduced himself as the Lead Shoveler. He repeated Old Jos' invitation to visit the Deathodendron and marvel at the gardens. He also offered the group cookies. No one took him up on that as they moved deeper into the district. Behind them the gardeners sang a merry tune together.

Partway through an even broader corridor the Idoneth mage was informed by his water elemental that there was something special in one of the mold-covered apartments. After a quick search the group found a magic mirror with the ability to multiply the daylight shining down through the shafts in the ceiling. The dryad took possession of the mirror and the group moved even deeper into the ruined district.

They entered a very large market square, this one empty except for a thick layer of mist by the ground and large piles of rubble. A portcullis slammed shut behind them as they walked onto the square. Fat, armored shapes of Blight Kings moved in from between the misty rubble. The Witch Aelf, utterly unimpressed by ambushes, jumped forward and cut down one of the Blight Kings in a flurry of daggers. Blight grenades flew at the rest of the group, doing amazingly little damage. The human rogue ran towards what he thought was safety, only to discover that a Lord of Plagues and two Blight Kings had been hiding at that exact location. To make matters worse Nurglings crawled up through a metal grate.

The group fought bravely, but within a short time, five of the nine surviving Freeguild troopers where knocked out and carried off. The Kharadron screamed 'follow me' and ran into a nearby mold encrusted corridor. The gas alarms in his helmet screamed as puffs of poisonous spores sprang up from everywhere. A wall of poisoned spores cut the Duergar off from the rest of the group. Luckily his gas mask kept him save.

The Witch Aelf moved towards another exit, only to find it blocked by a humongous Feculant Gnarlmaw (basically a diseased treeman that has taken root (and grown extra mouths)). No escape there either. The Sylvaneth dryad uncovered the magic mirror. The extra daylight helped it find a hidden exit. One by one the group sprinted towards it. The rogue even managed to help two Freeguild soldiers escape. The Witch Aelf entered last. As she rammed the door shut, she saw Nurgle worshippers carry the rest of the red coated soldiers off.

The Kharadron, alone in a corridor filled with poisonous spores, was glad for the protection of his gas mask. Unfortunately he did not have a good compass. Desperately trying to retrace his steps, he only managed to get even more lost. Would the rest of the group be able to find him? Was there any chance to rescue the captured scouts? What would the Deathodhendron look like? We'll have to find out in the next gaming session...

Entering the first district of Hollowreef marked the end of the prologue and a true start of the story (for me as a GM, players tend to not really have a clue what is happening until a campaign is finished in my experience ;)).

As you can tell from the adventure so far, the district the group entered is under the control of Nurgle worshippers. I decided to plan some major encounters and tie them together with a bit of storyline. The motif of this story is a bit like 'Heart of Darkness' and 'Apocalypse Now'. Instead of a river the group follows dank, mold covered corridors, but as they move further towards their destination, things get more horrifying.

To portray Nurgle worshippers I decided to follow the AoS books I've read so far. In presentation their god is very friendly, caring and cuddly. Unfortunately 'cuddly' does not mix well with highly contagious diseases, slime, puss and an uncontrollable homicidal streak.

Nurgle's followers tend to emulate their god. They are a cheery (and disgusting) lot that will only drop that façade if you show no wish to join their cult (turning around and trying to leave would lead to violence, moving further into their domain is no problem). It made for a lot of fun encounters in the ruined district with its utterly disgusting denizens (very graphic descriptions of offered foodstuffs where a nice bonus). It was a lot of fun to see the group slowly drop their guard in the face of overtly friendly monsters, only to shoot back into full panic mode as horrible things happened to the careless (like the unfortunate Freeguild extra). 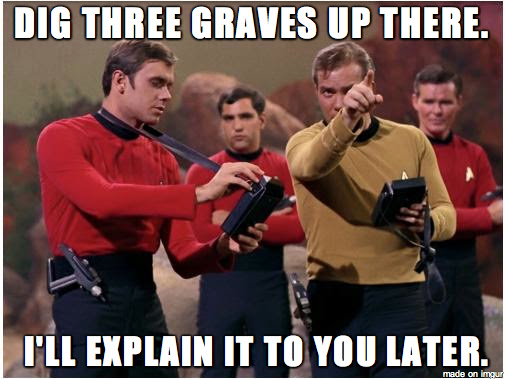 Another nice experiment to try was giving the group a whole bunch of redshirts as company. I hammed it up by giving the Freeguild soldiers a red uniform coat. To make the redshirts slightly more than cannon fodder I decided to give each member a role in the unit and a personality. I used a table from the old Only War roleplaying game to roll up random personalities (you could use any table you want for this). The bilious and spiteful commander really managed to tick the group off from the start. A special mention needs to be made for Aldo 'dad joke' Licht. A battle wizard with a penchant for bad puns is really someone to have by your side while traveling through mold encrusted corridors. I was a bit worried they'd personally feed him to the first daemon encountered.

All in all it was another fun session with the combat system for Soulbound once again proving to work quite well if you want combat to be epic in scale without blasting player characters out of existence every turn. Having the most fragile character in the group fleeing towards the worst direction possible was a nice bonus if you ask me. The screaming redshirts getting kidnapped made it all quite memorable. Basically I can't wait for the next session. Good times.

Elsewhere on the internet...