Cursed City, the heroes of the story, and a long rant about army building in Age of Sigmar 3.0

Ah Cursed City, now there is a tale to be told, and I don't mean the one in the background (although that is quite good). I lucked out and got my hands on a box and set to painting these. This weekend I finished the eight heroes that come with the game. Here's a group shot. Aside from these models this blog post will be a bit uncharacteristic because I feel like ranting (something I actually try to avoid on my blog). But with the release of AoS 3.0 I decided to follow the Dutch proved that says: "Don't turn your heart into a murder pit." Speaking of murder pits, the fun part first. Here's a group shot of the heroes of Cursed City.

Cursed City is was supposed to be the latest Warhammer Quest game. It is set in the city of Ulfengard in the Realm of Death. It is one of those wonderful over the top Age of Sigmar settings. The story (in broad strokes) is that the city managed to stave of a Khorne invasion during the Age of Chaos. It did so by allying itself with a vampire lord. A logical choice as it was founded in the saver center of Shyish (the Realm of Death). This made it easier to contact vampires, while at the same time close enough to normal to live with them. When the Age of Sigmar started the vampire was still protecting the city. Then Nagash used his magic to turn the Realm of Death inside out. Usually a realm's influence gets more pronounced as you travel towards its outer edge. Thanks to Nagash's bungling Shyish works the other way around. As the city is close to the center of the realm the world around it suddenly turned into a horror movie hellscape (well deathscape), cursing the city and putting the vampire lord on top. In Warhammer Quest your band of adventurers enters this Cursed City to slay its evil overlord.

For those of you not quite up to speck with the latest news around GW, (well sort of latest, it is a few months old by now) the release of Cursed City was an unmitigated disaster. The game was presented as the new edition of Warhammer Quest. After the Silver Tower and Shadows over Hammerhall we could go wild with this one for the conceivable future. It sold out within the first ten or so minutes on pre-release. Another rousing success you'd think. Then the game disappeared. GW reverted to its start of the millennium wall of mysterious silence as PR mode. No one knew what was up with Cursed City until a support agent (allegedly) told a customer it was a limited release that would never return. Despite the internet hue and cry no other comments have been forthcoming from GW. The game sells for silly money on eBay. As it happened I lucked out (as I really wanted the game). The Dutch webstore MiniHobby (for some odd reason) got 100 copies of the box after the bungled release. They opted not to go for 'profiteer mode' and instead raffled off the copies at their normal discounted price. I was one of the lucky ones to get a copy and I've been happily working on the models between other projects.

As these are game pieces with accompanying cards I've been trying very hard to (more or less) follow along with the box art. I'm also taking some extra time trying both new things and those odious things that require patience like the freehanded runes on both sides of the odd cape of the model above. I hate to add more pain to people who wanted this set and can't get it, but it is awesome. I truyly can't understand why no more copies are forthcoming. This is an age where we've gotten used to Made to Order and constant (almost too much) interaction by GW. Why has this box been relegated exterminatus?
Ah well, as this post is a bit of rant on the bungled release I might as well keep the blood pressure going. I'll promise to get back to my regular cheerful blogs next time. Of late GW has been shifting course. It seemingly decided to go for the smallest font in the world on one hand. Aside from that they appear to think tournament organizers are the most important players of their game. Both these decisions annoy the hell out of me. Lets start with the small font. I'm getting old. There I said it :) How old? This year's birthday present (from me, to me) didn't just consist of a few Skaven, but also a pair of reading glasses (I'll add a 'painting while getting old' post to the 'to write' list). With that in mind, why has GW switched to a 6 point font? This weekend I played a game of AoS 3.0 and me and my equally aging opponent both stood there trying to decipher the obligatory General's Handbook at arm's length. Yes we mostly need reading glasses but not quite often enough to remember to bring them along. Why has the General's Handbook shrunk from A4 equivalent to this evil tiny size? Don't tell me it is to save space lugging it around. I'm transporting an entire army, I can manage an extra booklet. Now get off my lawn!
Ah that feels a bit better, now on to part two of my rant. Let preface by stating I fully appreciate the existence of a tournament scene. I don't begrudge them their need for special rules. Their type of play needs a lot of rules as they seem to be looking for the balance of chess mixed with the creativity of Warhammer. I wish them all the best, but I do not share the opinion that they 'play at a higher level' or have a 'mastery of Warhammer'. They play tournaments and are good at that. Good for them. I do not play tournaments. I play narrative and casual games. That is not a lower level, that's a different way to play the same game. Unfortunaly the pretense that tournament games are a 'superior class' has infected GW's game recent design. The latest editions seem to focus on tournament organizers, allowing them to host with minimal house ruling against exploits and 'treating' us to the bland mulch that some call 'playing Warhammer at a high skill level'. Ugh. 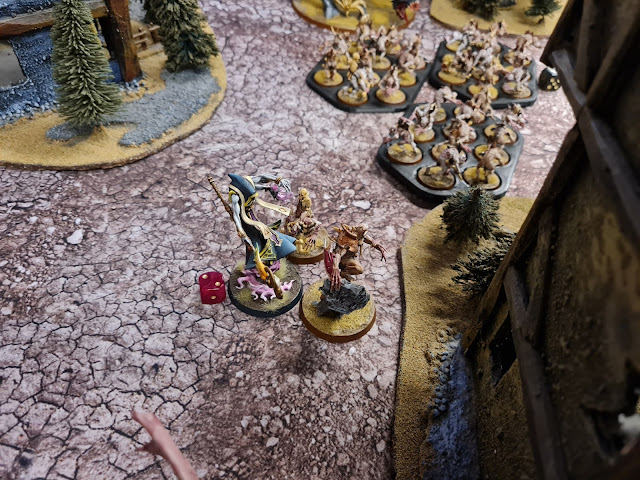 You wonder why I'd drop the Changeling in the midst of an enemy army. They changed the rules! And I only spotted the missing 'can't be seen' entry after the game started. Oh the (in-)humanity.
The result of this focus is a new 40K edition I've left in the stores. Why? Because as a narrative gamer I am not interested in an edition that was made with tight involvement by the world's premier tournament organizers. That sounds about as much fun as a 'fast food tasting' organized by the world's premier weight loss experts. I mean, good for the tournament organizers and I wish them the best luck in all their future 40K endeavors, but I think I'll pass. Now Age of Sigmar 3.0 has hit the markets. I like most of the rules updates, but sadly here too the building of point costed armies with lots of esoteric options and counterbalancing ones has infected the game. It was already lingering over 2.0 and 1.0, but this edition. Well allow me to demonstrate my process when I went and made a list for my second AoS 3.0 game this Friday.

And there you have it. The angry internet mob that fulminated at Age of Sigmar's launch. The wailing that a perceived lack of rules translated into a horrible game for stupid babies. Well that mob can douse torches and store pitchforks. What does this give the rest of us? An overcomplicated mess. Tournament organizers still need to add their own set of extra rules because half the point (and all of the fun) in tournaments seems to be finding loopholes and exploiting these. The rest of us are left with the old 'Narrative you say? Just do whatever feels right you fluffbunny you. Now go away.'-approach.

Why complain, narrative games are about creating your own thing? You might ask. That is part of the point of narrative play isn't it? And yes in part it is. But point costing is not only there to bring 'balance' to a game (that in my humble opinion can't and shouldn't be balanced). For quite a lot of us it is a way to easily measure how long a game will last and get a semblance of what matchups will be fun. As much as I loved AoS even before the original General's Handbook launched. The added points made it easier to play. It was rather hard to get past turn two on a game night before it because we kept slamming too many models on the table.
As I'm listing anyway here's three reasons why narrative players use 'matched play' when we're actually going to play an 'open or narrative game'.

Getting casual games back on track is hard enough after all the lockdowns of the past year. Making army building a chore that takes hours (with the aid of software) is not helping. If I was magically transported to GW HQ I would propose these changes to Age of Sigmar:

Even fluffbunnies need a bit of guidance to field armies. Personally I would love to get a supplement like the ancient 3rd edition Warhammer Armies. You'd pick your entire army using a few page spreads / These listed rules and minimum and maximum models allowed. The warscrolls and Battle Tomes remind me of this, but utterly fail to deliver. To be honest at this point any system that would allow me to sit and make an army list in about thirty minutes without opening three books and two supporting websites would work for me. I really want to spend the rest of my hobby time either painting or playing the game. So there it is, rant ended, back to our regular programming.

Did I mention you need to get off my lawn! I'm going to have a blast writing my take on Warhammer for elderly people (well 45+ but close enough ;).

Elsewhere on the internet...